Inspired by some DIY and recycling ideas I found on Pinterest, and with only about 3 blank pages left in my current notebook, I decided to make my own new notebook out of paper I was given at past conference, with a cover and backing made from some old cardboard packaging. To make it I simply cut the paper and packaging to size and took the whole lot off to Jetline to bind for me. I think it turned out quick well – take a look:

It’s a littlie – A5 – perfect to fit into my handbag, and I reckon the Jungle Oats cardboard will be more than strong enough to withstand the bumps that being in a handbag will no doubt bring. I like it because it was cheap and easy to make, it’s unique and it has kept some cardboard out of the landfill for just a little bit longer.

What do you think? Novel and covetable or just a bit weird?

Do you think you would like one too? I’m thinking about making a few to sell if people are keen… Please let me know.

If there is only one video you watch online this week, please make it this TED one by Pam Warhurst about her ‘experiment’ in communal vegetable gardens in her home town of Todmorden in the UK. She’s funny, energising and so inspiring!

“I wondered if it was possible to take a town like Todmorden and focus on local food to re-engage people with the planet we live on, create the sort of shifts in behaviour we need to live within the resources we have, stop us thinking like disempowered victims and to start taking responsibility for our own futures.” – Pam Warhurst

When I was a child I went to both the Brownies and to Girl Guides. It was probably the only extra-mural activity (besides pottery) that I really enjoyed and didn’t give up after a few months. I made it all the way through the “ranks” of both.

The other day I visited my mother and she had found my old uniforms – I had no idea she had them, so it was quite a fun surprise. Seeing them brought back some cool memories of the things we did as part of earning our badges and getting out in nature.

END_OF_DOCUMENT_TOKEN_TO_BE_REPLACED

Completely by chance, yesterday I discovered that eWASA is holding an e-waste collection day next Saturday. I knew that they had done these before – but I always seemed to find out about it after the fact, so I’m quite pleased that I found out about this one in time.

It’s amazing how we end up collecting bits and pieces of electronic or electrical things that either break or can’t be used anymore and I refuse to put them in the trash to go to the landfill. END_OF_DOCUMENT_TOKEN_TO_BE_REPLACED

We have just got our latest utilities bill and I’m pleased to announce that our electricity usage is the lowest it’s been in the past year: 205kWh. (For those of you who don’t know how many kWs you use, to give you a comparison, it works out to R167.35)

I even pulled out all the old bills to double-check!

Now, over the years that we still have records for, our lowest usage months are usually February for some reason (I’m not able to explain this!). So the fact that we’ve dropped another 42kWh from last month’s bill is quite exciting.

The only thing I can think that has made the difference is that, as I said in my New Year Resolutions post, I’ve been replacing any blown bulbs in the house with LEDs – and it just so happens that we had a few blow in our open-plan area. I did some shuffling with the existing CFLs I had in other rooms, putting the lower wattage ones and new LED’s into our multi-spotlight fittings in the main open-plan area, which are the ones that are used the most in the house.

Not that I needed it proved to me, but this stuff works. You have our house and our electricity bill as proof.

Something I haven’t actually mentioned on this blog (perhaps I should have?!), is that last year I did two eco-auditing courses. One had a residential focus and the other was for offices.

Both were with the same lecturer, Martina (Tina) Gluckman, but with two different companies. The first was with Global Carbon Exchange and the second with the Terra Firma Academy.

Anyway, a little while ago, Terra Firma asked if they could get my feedback/thoughts on the Office eco-auditor course and so I agreed to a telephonic interview. They’ve now just published it on their blog, with links to it in their latest newsletter – take a look see: http://www.terrafirma-academy.com/interview-with-tracy-frayne/ 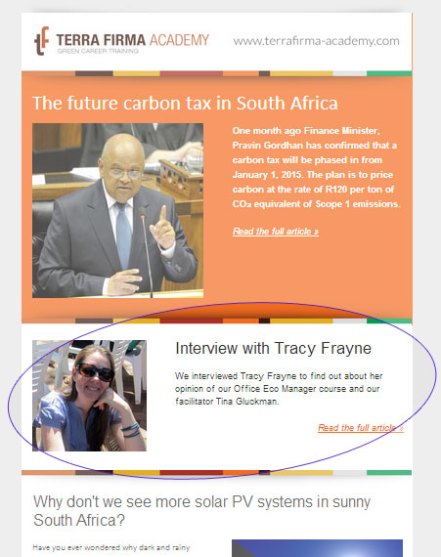 Life has taken over a little bit of late, hence this belated post about the new Motherland Coffee Company shop in Dunkeld West which opened on 25th February.

My friend and blogger-extraordinaire, Phillygirl,  passed an invite to the opening of the new store on to me because she doesn’t drink coffee. Suited me just perfectly – I love coffee, especially when it’s fair trade African coffee!

Motherland has a shop in Rosebank already, one which I’ve frequented a few times – we’ve even held a Joburg Green Map meeting there! The new one in the Dunkeld West Shopping Centre has a different feel to it – seems a little smaller and more homely almost. It will definitely be my first choice of coffee shop when I’m in that area from now on and I urge you to give it a try too.

Their opening evening was marred slightly when the lights for the entire block went out – I think they were more upset about it than any of their visitors. There was enough light to make your way around, and they had plenty of snacks and wine to enjoy. I luckily managed to get a coffee just before the electricity went off! I mentioned to the manager that having an opening in the dark was super eco-friendly – even if it was a month too early for Earth Hour! ;) 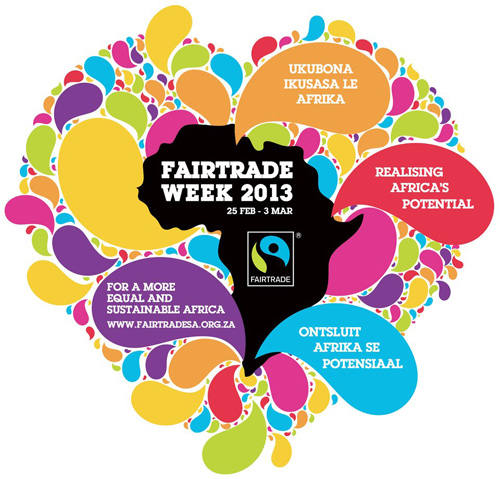 This week is Fairtrade Label South Africa’s annual Fairtrade Week with the aim being “to recognise the potential Africa has to be more equal and sustainable through Fairtrade”.

Fair trade, if you don’t already know, is an ethical and sustainable approach to trading. It’s essentially about caring for the both the people and the environment involved in the production of goods. The Fairtrade Label SA is a certification organisation that measures standards and ensures compliance for those producers and traders wishing to use the label. Seeing that label on a product is a definite win in my opinion, and I always choose a Fairtrade product over a non-certified product. (You should too!)

This week then, is all about raising awareness about what fair trade actually is, and then of course promoting the South African products that have been certified. You’d be surprised just how much there is available – check out the Fairtrade Label SA website for examples. 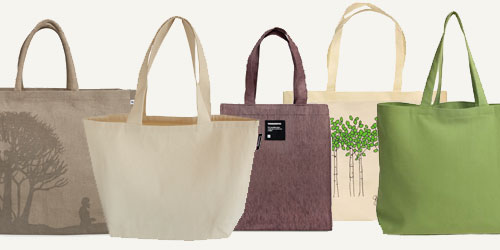 When I popped into the shops earlier today, I very nearly – and purposely – didn’t take my reusable bag with me. You heard me; I actually considered buying a plastic bag*. Of course, I changed my mind at the last minute, but it did leave the plastic bag issue on my mind as I did my 5 minute charge through Pick n Pay to get the milk and other necessaries.

While I stood in the queue I noticed that, as per usual, no-one else had brought along their own bags. Everyone was just buying plastic. Now, besides the environmental issues that I’ve discussed many times before, today I pondered why people like wasting their money. Because really, that is what I think they are doing.

END_OF_DOCUMENT_TOKEN_TO_BE_REPLACED

Pictures often speak louder than words. I think this one definitely does. 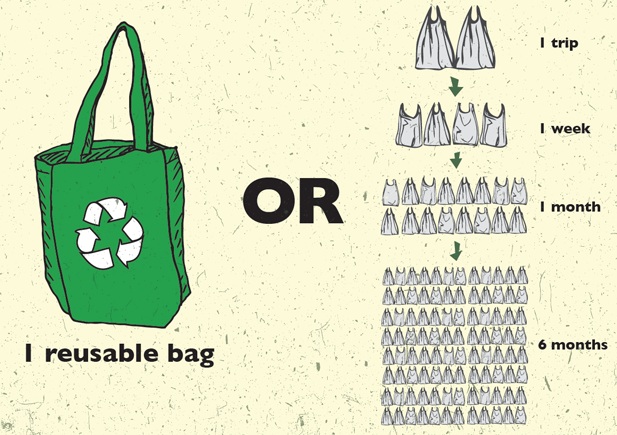 Back to top
The Green Forrest
WordPress.com.